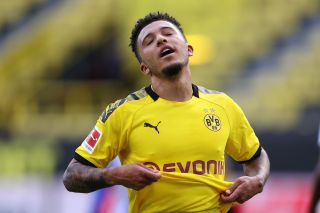 Jadon Sancho has two years left on his contract and Borussia Dortmund are believed to be asking for in excess of £100m for the England international.

According to Sky Sports, Manchester United will not pay more than £50m for the right winger, potentially destroying any chance we had of getting a deal done for one of the best young players in world football.

It has been reported by a number of outlets that Sancho is keen on a return to the Premier League but it’s clear from this report that Dortmund and United are miles apart on their valuations.

The important line picked up in the Sky Sports report outlines that officials behind the scenes at Old Trafford believe Dortmund’s valuation does not sufficiently reflect the costly fallout from the COVID-19 pandemic.

Is this for real or is it a smokescreen? Even in this transfer window with financial implications Sancho is worth more than £50m.

There’s absolutely no way Dortmund will leave him go for that.

Read more: Scouting Report: How Manchester United can break down in-form Brighton side