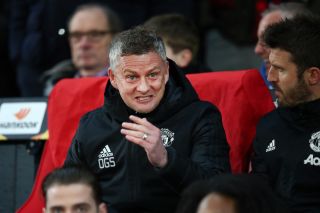 Ole Gunnar Solskjaer has admitted Angel Gomes is poised to leave Manchester United, with the youngster’s contract set to expire on Thursday.

A renewal has not been agreed and Gomes is expected to find a new club for the next chapter of his career.

According to The Express, United are moving quick to find a replacement for Gomes (not that he really needs replacing!) in the form of Aston Villa captain Jack Grealish. The attacking midfielder has a £80m price tag attached to his name, as per the report, but surely that will go down if Villa get relegated.

Gomes joined United’s academy in 2006 so he’s been at the club since he was a kid. The coaches from the academy — including current first team manager Solskjaer — throughout those years watched him flourish.

But Gomes has had a limited amount of time playing with the first-team this season and he has probably looked at the competition in his position and decided he wasn’t up for it.

The Independent claims that Chelsea had offered a contract to Gomes, but does he think he’ll make it there and not United? A bit of research will show you Chelsea’s youth players rarely witness first-team promotion — unless they are banned from making transfers…

Our friends at Caught Offside think Grealish will be a big upgrade on Juan Mata and Jesse Lingard. Nobody is going to argue with that!

Read more: Scouting Report: How Manchester United can break down in-form Brighton side