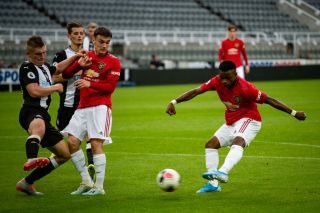 Largie Ramazani was one of the ten players released by Manchester United this week following the expiration of their contracts.

The 19-year-old has sent a message of thanks to Manchester United, his teammates and supporters after his release from the club.

Ramazani scored nine goals in 13 Premier League 2 appearances this season, but he is now free to join any club that shows an interest in him.

He took to Twitter to thank everyone ahead of his departure.

“I prepared a text here for today,” Ramazani wrote. “The life of an athlete is made by challenges. Some are given to us. Others are fruits of our decision to keep the light that illuminates our career, which is short.

“I want to thank the club for helping me become a better footballer/person and for making me and my family feel at home during my time here.

“After all the years I can only say thank you to the club, to the fans that have supported me since the first day I wore this jersey and of course thank you and good luck to my team-mates, who helped me settle in since day one not only as a teammate but as friends/family.

“Today I will say goodbye to Manchester United but I take with me many memories, lessons and great moments that will love with me forever. It has been one of the best years of my football career. At last I want to wish the club many success for the future and thank the cub for giving me the opportunity.

With the future of Ramazani up in the air we will be providing updates on where he ends up.