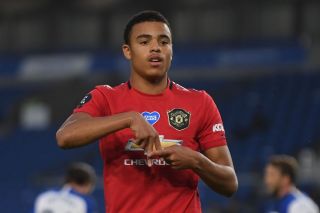 Departing Manchester United star Angel Gomes has thanked Mason Greenwood for dedicating his goal to him in tonight’s 3-0 victory over Brighton at the AMEX stadium.

Greenwood opened the scoring in a scintillating Reds display, justifying Ole Gunnar Solskjaer’s decision to start him on the right-flank ahead of Daniel James.

The teenage sensation showed tremendous skill to deceive the Brighton defence before firing a shot into the bottom corner.

Greenwood celebrated his 13th goal of the season by making the letter ‘A’ with his hands. It has now become clear that this was a tribute to academy teammate Angel Gomes who is set to leave the club when his contract expires at midnight.

United could not agree a new contract with the talented playmaker and we are now waiting on a decision on his next move after he grew frustrated at a lack of game time under Solskjaer.

Gomes, who has been at United’s academy with Greenwood since the age of six, posted an Instagram story thanking his friend for the gesture:

“No words! I love you bro. Special, special player, thanks for the dedicated goal,” the caption read along with a love heart emoji.

Angel Gomes thanks Mason Greenwood for his goal dedication pic.twitter.com/gSkPvKnVkF