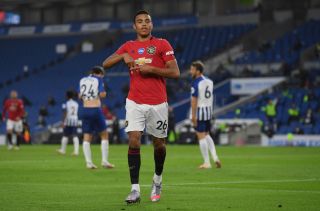 Mason Greenwood produced his most impressive Manchester United performance to date as Ole Gunnar Solskjaer’s side cruised to a 3-0 victory over Brighton at the AMEX Stadium.

Solskjaer preferred the teenage sensation on the right-flank to Daniel James, who many expected to start this evening after the Welshman was left out entirely in the FA Cup tie against Norwich.

Greenwood proved Solskjaer right with his selection decision within 16 minutes, scoring with a Robin Van Persie-esque finish between the legs of a Brighton defender after bamboozling with a number of stepovers.

The academy graduate was a constant threat throughout against a deep-lying Brighton defence that suited him. James perhaps may have not had the same impact as he thrives most when he has open space to run into.

Greenwood turned provider in the second-half as United scored a special third, with Bruno Fernandes volleying home his inch-perfect cross to complete a devastating counter-attack.

Solskjaer has a special talent on his hands in Greenwood and his numbers tonight were pretty much exemplary.

READ MORE: Stat: Bruno Fernandes has done something only one other Man United player has managed in Premier League