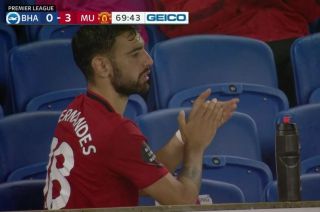 Bruno Fernandes didn’t seem human until he was substituted tonight.

After playing against Norwich at the weekend and showing signs of fatigue, the Portugal international was sensational again tonight and scored a brace against Brighton.

The midfield seems a lot stronger with Fernandes joined by Paul Pogba and Nemanja Matic. All of a sudden there’s a lot more balance to our shape and players know their roles; when to sit back and when to get forward.

Tonight United got forward a lot and are still piling the pressure on Brighton. It won’t do our goal difference any harm.

Anyhow, whilst sitting on the bench Fernandes was spotted drinking either milk or a protein shake.

Some United fans joked about this being the secret behind his football powers.

Fernandes is currently sitting in the stands after a MOTM display drinking a bottle of milk and screaming at our players. Iconic.

Bruno Fernandes drinking a bottle of Milk. Yo can drink anything you want. You've earned your rest!

Bruno Fernandes says that if I drink milk then one day I might be good enough to play for Accrington Stanley.