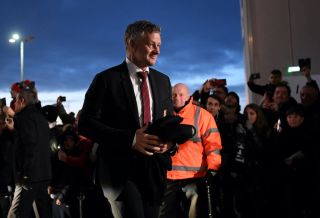 Manchester United are set to take on Brighton and Hove Albion in less than half an hour in what is shaping up to be a vital game in the Red’s run-in, in their race to secure Champions League football next season.

Manager Ole Gunnar Solskjaer has given his thoughts on tonight’s important match ahead of kick-off and addressed the flourishing partnership between midfield duo Paul Pogba and Bruno Fernandes.

When asked about the changes in line-up from the Red’s last game against Norwich City in the FA Cup, Solskjaer told Sky Sports:

“Well, we’re through in the cup so we’re happy. This is a team who have played together less than a week ago so they’re not unfamiliar. They played really well against Sheffield United.”

Both Pogba and Fernandes are set to start for just the second time with the previous occasion being against Sheffield United last Wednesday. Solskjaer has confirmed that both players are growing increasingly more familiar with one another, he said: “I think it goes with football that you get used to each other, used to where people want the ball. […] Both are creative players. […] Scott and Fred never let us down though so I am in a good position.”

United will be weary of the threat Graham Potter’s Brighton pose having lost in their last two visits to the AMEX. When asked about how tough this clash is for the Reds, Solskjaer said:

“Everything has to be right. We’ve been here the last two years and haven’t got any points. We know it’s going to be hard […] We have to focus one game at a time. […] This is the beauty of having a good squad.”

Solskjaer’s Reds will be looking to extend their impressive 14-game unbeaten run tonight as they look to close the gap between 5th and 4th placed Wolves and Chelsea, respectively.