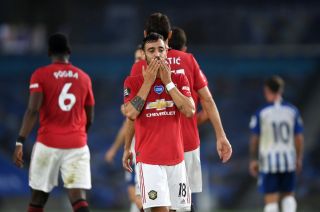 Manchester United andBrighton and Hove Albion have played the first-half of football in a pivotal game which could see United make up ground in the race for the top-four and the Reds haven’t disappointed.

The Reds have endured a simply superb first half at the AMEX Stadium and have gone into the break 2-0 up thanks to goals from Mason Greenwood and Bruno Fernandes.

Ole Gunnar Solskjaer will undoubtedly very pleased with his side’s first-half performance with their opposition barely seeing any of the ball. United have thoroughly dominated proceedings with some smooth inter-linking football which has helped the Reds boast an impressive 70% possession.

United’s 18-year old Greenwood opened the scoring in the 29th minute with a trademark low strike into the bottom left corner.

Just 11-minutes later, fan-favourite Fernandes doubled the scoring in the same corner of the goal after an assist from partner Pogba.

United will be looking to begin the second half in the same fashion they finished it – on top.

During the break, fans have taken to social media to express their pleasure with watching their side play an irresistible 45-minutes.

First half 0-2 for united. Should be comfortable from here on. Defence is strong. @AnthonyMartial and @MarcusRashford giving a hard time to home defence. #ggmu #MUFC #BHAMUN

2 nil up and playing some beautiful football. This time last year against teams like Brighton we just never knew how to break them down and just hoped for the best. So good to kinda see the old United back. Keep going lads were going in the right direction #BHAMUN @ManUtd

One of the most dominant halves of football I’ve seen from us in a long time, didn’t put a foot wrong. 👏🇾🇪 #MUFC #PremierLeague #BHAMUN

I could watch this manchester United day in and day out. Mason, what a young talent and bruno- Pogba link up play has been top notch. Rashford and martial needs to step up their game! #BHAMUN

Mason Greenwood never stops reminding me of Van Persie and the Bruno-Pogba partnership is something the premier league is not ready for. GGMU#BHAMUN

Dominant first half. More of the same in the 2nd please. #BHAMUN