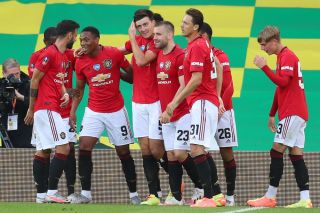 The Reds are hoping to build on their 14-game unbeaten run and Solskjaer has challenged his side to complete the season without any defeats.

Unsurprisingly, Solskjaer has made plenty of changes from his team that scraped past Norwich City in the FA Cup quarter-final on Saturday.

David De Gea returns in goal in place of Sergio Romero, who was criticised for not keeping out Todd Cantwell’s long-range effort at Carrow Road.

Aaron Wan-Bissaka and Victor Lindelof return to complete what is arguably United’s best back four alongside captain Harry Maguire and ever-present Luke Shaw.

The midfield three that worked so well in the comfortable victory over Sheffield United in United’s last league outing is reunited, with Nemanja Matic shielding the back four allowing Paul Pogba and Bruno Fernandes to roam further forward.

Anthony Martial and Marcus Rashford both have the chance to surpass 20 goals for this season this evening. The pair start in a front three alongside Mason Greenwood and are both on 19 in all competitions.

🗞 Fresh off the press: it's the team news for #BHAMUN! 😊#MUFC @DHLManUtd

READ MORE: Opinion: Don’t read too much into Man United’s £50m limit for Sancho, this is just a warning to Dortmund