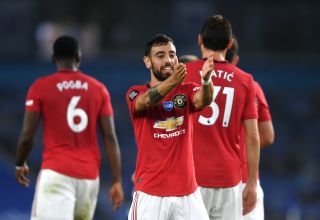 Manchester United are putting on a simply irresistible display against Graham Potter’s usually well-organised Brighton and Hove Albion in a game which has seen midfield sensation Bruno Fernandes do something only one other United player has managed to do.

The Portuguese midfield attacker has endured a monumental start to life in Manchester since his January move from Sporting Lisbon.

The 25-year old started his fourth game in a row tonight since Project Restart and has managed to continue his fine form scoring twice at the AMEX Stadium, his second being the best the United faithful have seen for awhile.

Since his arrival at United, Fernandes has been directly involved in eight goals in his first eight Premier League games for the club (five goals and three assists) – Something only Van Persie has achieved at the same stage of his Premier League career, also during his time with the Reds, as per @OptaJoe.

8 – Bruno Fernandes has been directly involved in eight goals in his first eight Premier League games for Man Utd (five goals & three assists) – only Robin van Persie has had more (9) at this stage of his PL career with the club. Sensation. pic.twitter.com/iw4oxj4T4j

United fans rightfully have genuine reason to feel excited by their latest midfield addition and will be hoping he can extend his impressive record into double figures.