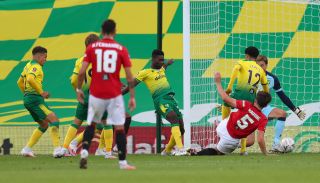 Hello and welcome back to Rowlesy’s Ramblings. By the skin of their teeth, a much changed United side had to call on its big guns in an extra-time slog with Norwich. Captain Harry Maguire slid home the winner, just as it was getting to Tim Krul inscribing on his bottle where Odion Ighalo had placed five of his last seven penalties in his back garden during lockdown.

United will head down to the capital to take on Chelsea in the semi-final. Springboard is often used in footballing parlance and there are many managers out there who are looking for a trophy to be the catalyst for greater things. It was speculated in the Mourinho era too that wins over Southampton and Ajax, in the Carabao Cup and Europa League respectively, would be just that but it wasn’t to be. This is a genuine opportunity for Solskjaer, and the improvements since the winter, to be rewarded with silverware, so it was a big goal from Maguire, even if the performance was not up to recent standards.

With such a congested fixture schedule, United used Norwich as a chance to rotate and rest players, with only Maguire, Shaw and Fernandes surviving from the midweek win over Sheffield United. The gamble you take with wholesale changes is two fold, particularly after such a long lay off: A) Players who haven’t featured at all lacking in match sharpness and B) Performances tend to be disjointed. Football is about forming relationships on the field to enable consistency and fluency, but that is hard with new players in positions and new understandings needing to be formed. Jesse Lingard and Juan Mata do not have the same fear factor or searing pace of Rashford and Martial, which made United a different proposition to their optimum strength and allowed Norwich to press higher and squeeze the pitch. It was only really the red card to Timm Klose and the introduction of Martial that sent United through the gears.

I mentioned to a few friends that  Fernandes looked like he had his worst game so far in a United shirt. Few would disagree with that, particularly as his distribution and shooting were bags of Revels, not knowing what you’ll get. Even when not playing his best match though, what I love about him is he still makes a difference, still strikes fear into the opposition and he never stops trying or goes hiding. I watched back a clip from extra time where Norwich tried to spring a counter attack involving their indefatigable, impressive left back Jamal Lewis. The ball gets played out to their left winger Onel Hernandez who tries to feed Lewis’ overlapping run. Fernandes covers Brandon Williams, who was preoccupied with Hernandez, and sprints from the centre circle all the way to the corner flag to dispossess Lewis. The most impressive thing was Fernandes clocked the run from deep even before the ball was played to Hernandez.

That game awareness and steely determination are vital ingredients of a winning mentality United desperately need to get ingrained back into their DNA. Fernandes looking like he had a bad game was exacerbated by how disjointed United looked and his full time statistics read as 72 final third passes, 7 shots, 5 chances created, 3 successful take ons and 3 tackles won. If that’s his worst game then what we already know has become even clearer, we have a hell of a player on our hands!

United’s next venture, in this jam packed schedule, takes them to the AMEX to take on Brighton on Tuesday night, who have picked up 4 points from 6 off Arsenal and Leicester since the restart and it could have been maximum had Neal Maupay converted his penalty at the King Power Stadium. A tough proposition on paper seemingly: Brighton in form of sorts, a quick turnaround for United and having to have extra time at the weekend.

However, it’s vital United keep this momentum going. It is the longest unbeaten stretch Solskjaer has enjoyed since permanently getting the job, some might say new manager bounce has turned into Bruno bounce. Joking aside, even winning ugly at Norwich is not a bad habit to pick up, how often have we bemoaned United dropping stupid points when playing badly? Getting that habit back will go a long way to closing the gap, or rather, yawning chasm between themselves and the runaway top two.

Of the players who played the whole two hours at Norwich, you would only expect Maguire and Fernandes to be some of the first names on the teamsheet. A case could easily be made for  Williams to take Luke Shaw’s left back berth, with Shaw somewhat underwhelming after the restart, given the form he showed pre lockdown. The majority of players who started the convincing victory over Sheffield United were either rested or used in a cameo role only so, despite the quick turnaround, Solskjaer should revert back to as close to that XI as possible and there should be a decent level of freshness there. Of course, winning is one of the best remedies for aching limbs or progressive fatigue.

The run United are on will mean that the players will only be looking forward to the next match, especially with the top four, an FA Cup semi final and Europa League knockout all still up for grabs.

It has to be said, Chelsea and Wolves are not showing any signs of letting up, so it’s imperative that United keep finding a way, it’s not about the performances at this stage of the season, to keep on finding the victories. That’s all United can do, just focus on their business, first and foremost, then hopefully they get a slice of luck in the shape of Chelsea dropping points.

Chelsea look imperious at the moment, their win over City was a huge blow. It means it’s win or bust until the end of the season for United now, as far as 4th place is concerned.