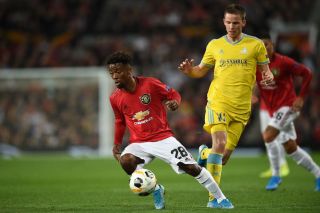 Reviewing the win over Norwich City, FA Cup semi-final draw and Angel Gomes’ imminent departure. All in this morning’s podcast!

Ole Gunnar Solskjaer made eight changes for United’s FA Cup quarter-final tie against Norwich and we discuss whether this was the right call from the manager. Although we got across the line with a Harry Maguire winner in extra time, Solskjaer called upon his usual starters from the bench so it wasn’t as if they got a rest before Tuesday’s league clash against an in-form Brighton side.

Some fans argued that the game vs Norwich was Bruno Fernandes’ worst performance in a red shirt, so Dale and Leah respond to those claims and offer an explanation as to why he wasn’t most effective throughout the game.

The FA Cup draw sees United take on Chelsea in the semi-finals, with both relatively inexperienced managers looking for their first major honour in the game.

We also discuss Angel Gomes after Solskjaer admitted in his press conference that there’s a very good chance the youngster will leave the club. His contract expires tomorrow night.

You can listen to the podcast below, or alternatively via your preferred podcasting apps such as Apple Podcasts and Spotify.