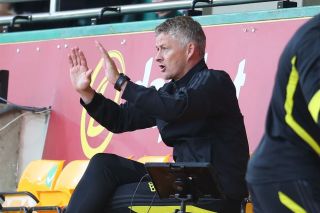 Ole Gunnar Solskjaer has set his Manchester United players a target of going unbeaten until the end of the season.

United are currently unbeaten in 14 games in all competitions and have opportunities to end the season successfully with a top four-finish with Europa League and FA Cup silverware also still up for grabs.

The Reds face Brighton away on Tuesday evening, and Graham Potter’s men can all but ensure their Premier League safety with victory over Solskjaer’s side.

But United must build on the momentum from the impressive 3-0 victory over Sheffield United in their last league outing as they look to keep tabs on rivals Leicester City, Chelsea and Wolves for the European places.

Solskjaer was asked in Monday morning’s press conference whether he believed his squad has what it takes to go the remainder of the season without a defeat.

“Any Manchester United team should go into any game against any opposition believing they can win that game,” he said, as quoted by the Mirror.

“So the short answer is ‘yes’, but the long answer is that there’s more to it than that.

“Of course, different things can play a part in this run, but we hope to extend it and want it for as long as possible.

We’re just going to take one game at a time. We know there’s games every two or three days.

“We need a squad, everyone needs to play a part and we’re delighted with the way things are going at the moment.”

Solskjaer is not underestimating any of United’s remaining opponents, with many fighting for their Premier League status despite what looks like a desirable run of games on paper.

The Norwegian boss has warned his players over complacency after coming unstuck on countless occasions against so-called ‘weaker opposition’ this season.

“But we have loads of games against teams who have lots to play for, which is of course not an easy run-in.

“So I would never ever say it’s an easy game in the Premier League, absolutely no chance.

“For us, we have to win the next game, so we can go into the next one feeling more confident.

“But we also need to push on, because complacency, that kicks you somewhere you don’t want to get kicked in football, and any game is a difficult one.

“We’ve lost the last two to Brighton when we’ve gone down there. We’ve got Bournemouth, who we’ve lost to.

“We’ve got Aston Villa, who we drew with at home. We’ve got Palace, who we lost to at home.

“We’ve got West Ham, who we’ve lost to. We’ve got Leicester, a very good team. Every game is one where we have a point to prove.”

Solskjaer is likely to make wholesale changes to Tuesday’s line-up from the side that scraped past Norwich City in the FA Cup quarter-final just three days ago.

We expect to see the likes of David De Gea, Aaron Wan-Bissaka, Paul Pogba, Marcus Rashford and Anthony Martial all return to the starting XI in a crucial game for United’s Champions League qualification hopes.