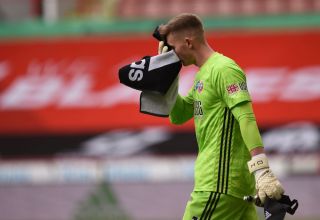 If David de Gea is gets lambasted for a mistake, it’s only right that Dean Henderson gets the same if he plans on booming first choice goalkeeper at Manchester United anytime soon.

Rio Ferdinand reckons Henderson could have done more to prevent Arsenal scoring a late winner in their FA Cup quarter-final tie. The Gunners narrowly defeated the Blades 2-1, with Dani Cabellos scoring his first goal in the competition to book his side a place in the semi-finals.

Speaking to BT Sport, Ferdinand said (via The Mirror): “I spoke about this a while ago, as a defender I would be very upset with the keeper there.

“The goalkeeper union might suggest something different but when I was playing that was how I used to feel.”

An injury-time winner to send Mikel Arteta’s side into the #EmiratesFACup semi-final! pic.twitter.com/E7ai4ryZXU

Henderson, who has been one of the most outstanding goalkeepers in the Premier League this season, is being talked about regularly as the successor to De Gea.

It’s his reliability this season that has him in this debate. With De Gea on a huge deal, it’s unlikely he will be sold this summer, but I think both keepers should be at Old Trafford next season to fight for the No.1 spot.

Let’s not forget Sergio Romero either, the Argentine very rarely makes a mistake when he is called upon and should also be allowed to fight for his place.

Van Persie gave his views on Arsenal’s winner, saying: “He waits, he sees, the back post is free for a cross but he’s guessing, hoping that the keeper gambles.

“I think the keeper doesn’t do great here, he can keep his corner more close.”

Read more: Video: Dean Henderson comes close against Arsenal with effort from his own box