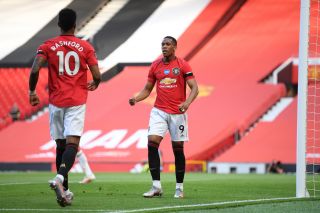 Ole Gunnar Solskjaer has warned Anthony Martial and Marcus Rashford that they must keep improving to retain their places at Manchester United.

Martial and Rashford are both on the verge of breaking the 20-goal barrier in a single season for the club for the first time, with each forward currently on a tally of 19.

The pair were entrusted to score the majority of United’s goals this season, after prolific goalscorer Romelu Lukaku left for Inter Milan without a replacement arriving last summer.

Martial and Rashford have struck exciting partnership in this campaign, scoring a combined 38 times despite both spending eight weeks on the sidelines through injury.

But Solskjaer has emphasised the importance of competition in attacking areas and has insisted that United are still looking to strengthen despite the form of his two key forwards.

You need competition for places at Man United,” Solskjaer said in a Zoom press conference on Monday, as quoted by ESPN.

“If you think you’ve got a divine right to be playing every game and are doing so well that we’re not going to look for players to replace you, you’re in the wrong place.

“I’ve been here myself for so many years as a striker and Teddy Sheringham comes in, Dwight Yorke comes in, Ruud van Nistelrooy comes in, Wayne Rooney comes in.

“We’ve always got to look at improving, and if they don’t improve, we might have to look somewhere else to get better because we have to be better. We’re too far away from where we need to be and want to be.”

Despite an encouraging season for both Martial and Rashford, Solskjaer’s mentality is spot-on.

United are 37 points behind Liverpool in the Premier League and need to be ruthless in the transfer window if they are to have any chance of competing with their fiercest rivals next season.

Alongside with teenage sensation Mason Greenwood, Martial and Rashford are both players Solskjaer can build his squad around for years to come.

But players of world-class ability need to be brought in alongside the trio to get the best out of them.

Jadon Sancho would be the perfect player to strengthen United’s forward line and solve a key problem with the lack of balance on the right-wing.