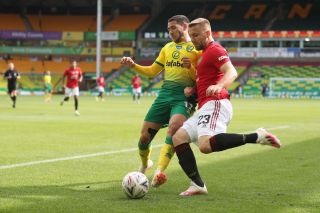 Since the return of football, Luke Shaw has been a mainstay in Manchester United’s defence.

Shaw, 24, is the only United player who has started all 14 matches of our unbeaten run and has played at left-back, as well as the left side of a back-three.

He was one of only three players — Shaw, Harry Maguire and Bruno Fernandes — who retained their place in the line-up for the FA Cup quarter-final victory over Norwich City on Saturday.

This morning we discussed Ole Gunnar Solskjaer’s team for the match on the podcast and many feel he made too many changes for the match — potentially disruption momentum.

Shaw played 120 minutes against The Canaries and Solskjaer was asked about the specific selection at today’s pre-match press conference before the Reds take on Brighton in the Premier League.

“We manage the squad and manage players differently,” Solskjaer told the media (via Manchester Evening News). “And Luke’s had a good upturn in form, he had a spell out earlier on in the season, he was working his way to full fitness. He’s worked over the lockdown and is playing some good football. Let’s see if he starts this one.

“The players are working really hard and want to do as well as they can. And, for me, as a team we’re trying to implement our ideas. You talk about 14 games but we’re just looking at the next one, as long as you go into the next game knowing that you’ve won the previous one it’s a good place to be in.”

While the FA Cup was taking place over the weekend, Wolves leapfrogged United in the Premier League standings with a 1-0 win over Aston Villa. A win over Brighton tomorrow night would see United climb back up to fifth.

Solskjaer added his thoughts on the race for the remaining Champions League spots, saying: “I think there are many teams for that battle for third and fourth. You’ve got Leicester, Chelsea, us, Wolverhampton are doing really well. Tottenham, Arsenal and Sheffield United still want to put a run together and put a challenge in there, so it’s exciting.

“It must be exciting for fans, who’ve been waiting so long for football that matters on the TV. Of course, we want the fans in the stadiums but at least now they can sit back and watch exciting games.

“I think every year you’re in the Champions League is a great experience for the players and it’s a step forward. For us, it’s what we’re striving to do and get to; winning trophies. And to get there we need to focus on one game at a time as there are so many teams just above us and just below us that want that place.

“We don’t want to get distracted by thinking too far ahead, we just need to go one game at a time and think when you go into the next one at least we won the previous one.”