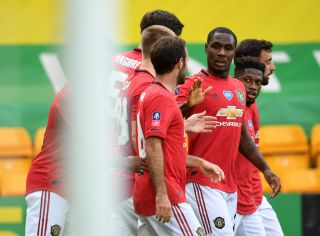 It’s surprising to see as many as five Manchester United players make an FA Cup team of the Quarter-finals.

Ole Gunnar Solskjaer made eight changes to his side that edged past Norwich City in extra-time at Carrow Road and the fact that many players hadn’t been in competitive action for over three months was painfully apparent.

There were plenty of sluggish performers against the Premier League’s bottom-placed side, with Solskjaer ultimately criticised for being too hasty in his rotation.

But the most important thing was that the Reds progressed to yet another FA Cup semi-finals and kept hopes alive of winning two pieces of silverware this season.

Captain Harry Maguire made sure United would return to Wembley just as a penalty shoot-out against the formidable Tim Krul beckoned.

However, despite a team performance defined by lethargy and a lack of cohesion, there was room in WhoScored.com‘s best XI for Maguire, Luke Shaw, Diogo Dalot, Bruno Fernandes and Odion Ighalo.

Maguire was the match-winner and arguably United’s most impressive player throughout so there are no qualms with his place in this side.

Though its a surprise to see the detailed statistics website have Dalot in the right-back position. The youngster had one of his worst games in a United shirt, failing to grasp his opportunity to put any pressure on Aaron Wan-Bissaka in the full-back position.

Also, while Fernandes has been United’s most influential player since his arrival, even his most ardent followers won’t have been thrilled with his output on Saturday.

Despite showing relentless energy and enthusiasm, the Portuguese playmaker was too often guilty of trying to force the issue and showed poor decision making at times.

See the team below, courtesy of WhoScored.com:

🏴󠁧󠁢󠁥󠁮󠁧󠁿 FA Cup Team of the Quarter-Finals – Ross Barkley and Odion Ighalo are the top scorers left in the competition (both 3) after both netting over the weekend 👏 pic.twitter.com/PyO9ZdMUjb