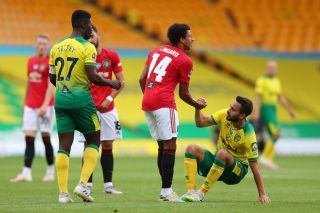 Dwight Yorke has suggested Jesse Lingard should leave Manchester United if things don’t improve for him by the end of the season.

Speaking after the FA Cup win over Norwich City, Yorke was asked about Lingard’s future in an interview with Stadium Astro, as seen in the video below.

“The jury’s still out. We had a lot of hopes, he came through the ranks and we love that. He knows the club through and through, he loves the football club and we thought he was going to go on where Rashford is at the moment.

“He’s come a little unstuck at the moment and he has to find another gear somewhere along the line. At the moment, it’s just not happening.

“At 27-years of age, you ought to be a bit regular. If it’s not happening, maybe he has to look elsewhere. But for now, he’s still got some games and he’s still got to prove himself.

“But I think there is a little bit of a question mark over his name at the moment for sure, he’s fully aware of that, there’s no two ways about that. He knows that he’s not in the team and he needs to do more to get back in.”

After the game against Norwich I scanned through Twitter and saw a picture shared by Lingard. The replies to the tweet were disheartening but it will come as no surprise when I tell you all of the accounts giving him abuse were hidden with false names or generic avatars.

However, there’s nothing wrong with constructive criticism and I do feel Lingard should look for the right move away from United, where he will get regular football and enjoy his game again.