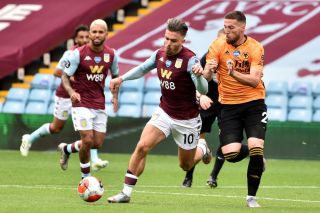 Manchester United have reportedly made significant progress in their pursuit for summer transfer target Jack Grealish after it has been claimed that the star has found a new house in the North-West.

Grealish, 24, saw his boyhood club side Aston Villa suffer yet another defeat yesterday in their quest to stay in the Premier League. The Villains were beaten 1-0 by top-four chasing Wolves and now sit 19th in the table on 27 points.

According to Daily Express, Grealish is has now taken a significant step towards Manchester United having finally ended a month long pursuit of a new home in the North West of England.

It is also believed that no transfer fee has yet to be agreed despite Villa manager Dean Smith revealing talks have been held between the two clubs.

Villa are thought to be holding firm in their valuation of a whopping £80m for their captain, a fee which the United hierarchy will be keen to drive should Villa fail to beat the Premier League drop.

With just six league games to go for Smith’s side, could Villa fans soon see Grealish wear burgundy and blue for the last time?