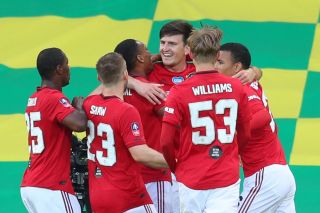 Later today we will find out who United will need to beat in a Wembley semi-final in order to qualify for the FA Cup final.

“Two different goals, one you don’t expect at Tranmere, you’d expect the header to go in today but it was a fantastic save,” Solskjaer told the press (via Manchester Evening News). “Harry’s been magnificent since he’s been to the club, his leadership skills are there to be seen, today he won every header and made every challenge.”

That’s all you can really ask of your defender and Maguire has settled in brilliantly at United to become club captain in his first season at the club. Solskjaer has found a player he can trust to lead from the back; one of the key requirements in a successful football team.

United’s first goal came from Odion Ighalo, scoring his fifth goal for the club in eleven outings, and maintaining his record of scoring in all four starts for the Red Devils.

“He’s very important, that was important for me [extending Ighalo’s loan], we worked hard to do it, Odion knows how much we value him in and around the dressing room,” Solskjaer added.

“He’s a goalscorer, a poacher, he’s strong, we can play the ball into him, he showed for the second and Paul Pogba found him. He’s performing well but it also gives me the chance to rotate with Marcus [Rashford], Anthony [Martial] and Mason [Greenwood] so they can get a rest and we’re fresh for every game.”

United will have their eyes set on not only top four but a trophy. After reaching the FA Cup semi-finals, Solskjaer stands a really good chance at winning silverware in his first full season in charge.

The Reds also have one foot in the Europa League quarter-finals.