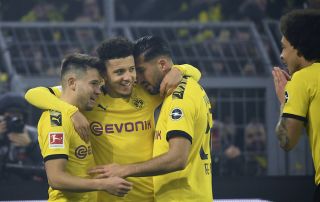 Ole Gunnar Solskjaer has reportedly been told he must sell four players if he wants to make a move for Borussia Dortmund sensation Jadon Sancho.

That’s according to Mirror, with Ed Woodward allegedly informing the manager he must cut his squad if he wants to make a £100m move for the England international.

This could see Alexis Sanchez and Jesse Lingard as the first players axed to free up space in the squad as well as funds. The former is on loan at Inter Milan and Lingard has fallen down the pecking order at United.

The biggest problem in this deal for United is Dortmund’s valuation. The Express claim the Bundesliga side are refusing to budge on their valuation which is in excess of £100m.

It is thought that Sancho’s head has already been turned with the player wanting to return to the Premier League and more specifically to play for United.

Chris Smalling, Andreas Pereira and Phil Jones are other players who could face the axe this summer.

Sanchez will be hardest to get rid of. No question about that.

However, Solskjaer has admitted no transfer decisions will be made until the club knows the full extent of the impact caused by coronavirus.

“We’ll need to wait and see how things are panning out to know the real effects of the pandemic, to know what sort of financial state we are in,” Solskjaer said.

“You will see some teams invest and some teams don’t. We’ll have to take a big look at things ourselves to see how hard we’ve been hit.

“It’s not for me to say we are going to have X amount because I don’t really know.

“We are a financially strong club, but we are also probably being hit more than anybody else.”