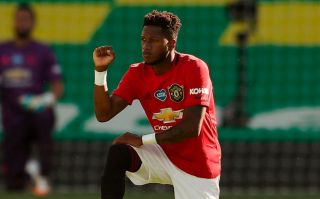 The Red Devils managed to squeeze past the resilient South East side in a narrow 2-1 victory which required 120 minutes of football.

Captain Harry Maguire settled the tie deep into extra time with a winning goal which saw his side become the first ones to book themselves a place in today’s FA Cup semi-final draw.

The United squad have now taken to their social media to express their delight at being within touching distance of winning their 13th FA Cup trophy.

😂😂 Thanks mate, I appreciate the pass 👌💪

It feels good to be back on the pitch👊🏻
Moving forward to the Semi Finals🔴➡️🏆FA Cup @ManUtd pic.twitter.com/WWoUAzHq7f

Into the semi-finals ⚽️🏆 pic.twitter.com/ic14GwSxGV