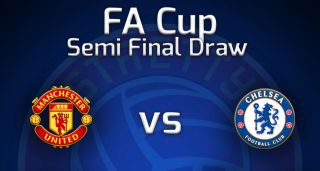 The draw for the FA Cup semi-finals has been made.

Manchester United have been drawn against Frank Lampard’s Chelsea who we’ve already beaten twice in the Premier League.

The Red Devils left it late to beat 10-man Norwich City in extra time at Carrow Road, with captain Harry Maguire netting at the very end.

Arsenal qualified thanks to an injury-time Dani Ceballos goal to overcome Sheffield United 2-1.

The other semi-finals sees Arsenal take on either Man City or Arsenal, as seen in the graphic graphic below:

Chelsea joined the two Premier League giants after beating Leicester City 1-0, and holder Manchester City have a one goal cushion at half-time against Newcastle United.

With an FA Cup semi-final against Chelsea at Wembley, we’ve still got a lot to look forward to this season.