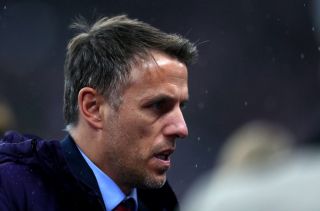 Phil Neville has identified one key position which he believes his old club need to add to before they can mount a serious challenge to dethrone arch-rivals Liverpool.

The ex-United defender believes that Ole Gunnar Solskjaer and his scouting team should be looking to bolster their defensive options by bringing in a new centre-back.

Currently embroiled in a five team race for the top-four as well as recently seeing off Norwich City in the FA Cup quarter-finals and with the Europa League still to resume, United have it all to play for this season.

However, with the Reds currently sitting 6th place in the league table, calls for star additions are being echoed by fans and pundits alike.

United have been constantly linked with attacking talents such as Jack Grealish and Jadon Sancho, as per The Independent. However, Neville believes the key to United’s long-awaited domestic success could lie in the form of a centre-back with the ex-player eager to see a Virgil Van Djik type effect happen at Old Trafford.

“One or two more signings or [Paul] Pogba and one more signing playing to their absolute best. I think United can get closer.”

When asked to confirm which position United to strengthen most, Neville added: “Centre back, you look at the impact Van Dijk had.

“Maguire has had a really strong impact but another real strong centre back. They’ve still got to be defensively sound. One more signing and United can challenge.”