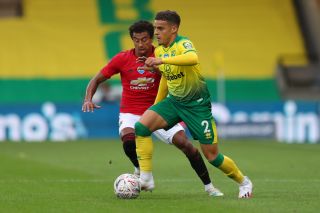 Manchester United qualified for the FA Cup semi-finals with a 2-1 win over Norwich in extra-time.

The Red Devils’ second string side laboured to a 1-0 advantage courtesy of a goal from Odion Ighalo, but progress was slow until the likes of Paul Pogba and Anthony Martial changed the game, after Norwich defender Timm Klose was sent off moments before the end of normal time.

By time Pogba and Martial reached the pitch, United’s talisman Bruno Fernandes looked exhausted and stretched to his limits with the amount of defensive responsibility and creative influence he had for Ole Gunnar Solskjaer’s side.

Fernandes, a first-team player in a sea of fringe players, had more responsibility than he does alongside the likes of Marcus Rashford, Daniel James, and Mason Greenwood, all of whom add significant creativity to the side. The player, over the course of the match, made 98 passes, 7 shots, and 5 key passes, while also producing 3 tackles and 2 clearances (via WhoScored).

While much of United’s reliance on the 25-year-old is unavoidable due to his tremendous quality, it must be said that Jesse Lingard and Juan Mata did little to help him in attacking midfield.

Lingard was anonymous barring a few mazy runs that should be expected of a creative player, and  Mata was ponderous in possession and ineffective in all thirds.

By the end of the match, Fernandes’ box-to-box duties and creative responsibility for the side saw him knackered, proverbially begging for another player to make the difference and win the match for Solskjaer’s side.

United need to learn from the burnout that occurred late last season and sign players who can improve the depth of the squad. Players like Sergio Romero, Eric Bailly, Brandon Williams, Scott McTominay, Fred, and Odion Ighalo showed today that they add valuable depth and quality, but in terms of creative midfielders and wingers, the Red Devils fall short.

Even though Daniel James was excluded today, and rumours persistently link United to the brilliant Jadon Sancho (via Manchester Evening News), that is not enough. United need to reach the point where Fernandes does not have to be the sole creator in a second-string side. In fact, for United to challenge on all fronts, they need to reach the point where Fernandes is not even in the second-string side and can focus more on United’s most important matches.

Currently, there are only two midfielders at Old Trafford with the ability to dictate play in the final third- Fernandes and Pogba- and both should be playing in the first team, making an attacking midfield signing necessary to add cover to the squad. This explains transfer links to Donny van de Beek and Jack Grealish, as per TEAMtalk and The Mirror, respectively.

Both players present their own advantages as I stated two weeks ago, but it is important that United get one of these players, or another player of the same mould. Today’s display proved once again that Lingard and Mata will never make the cut for Solskjaer’s system, and Andreas Pereira didn’t even play the match.

United have now gone an impressive 14 matches unbeaten, but pressure will begin to mount on key players again if they need to be at their best every three days to drag United to the Top 4. Unlike last campaign, United survived the FA Cup quarter-finals, but if they do not continue to rotate the side and recruit thoroughly, the side will not continue their ascension in European football.