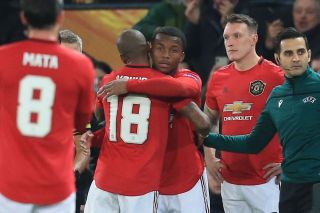 Manchester United rose to the occasion yesterday afternoon to see of fellow FA Cup Quarter Finalists, Norwich City and now managed Ole Gunnar Solskjaer has hinted at who the next youth prospect will be to break into the first-team.

Speaking in his post-match interview, manager Ole Gunnar Solskjaer remained committed in his approach to give youth a chance at senior football, as quoted by ManUtd.com.

In-line with Solskjaer’s enthusiasm for younger players, such as Mason Greenwood, Brandon Willams and Marcus Rashford who he introduced to yesterday’s crucial match all at the same time, the Norwegian confirmed who is next on his progression list.

Solskjaer revealed that 18-year old full-back Ethan Laird is next in line to join the United first team.

Laird made his United first-team debut back in 2019 in the Europa League against Kazakstan side Astana. The young full-back did go on to make a second appearance for United a month later in the same competition against AZ Alkmaar but has failed to break through again since then.

Solsjkaer said: “They keep on working every single day,” Solskjaer told reporters at Carrow Road when asked about his young players. “Jimmy [Garner] is training with us, Ethan [Laird] will probably come in with the group, Teden has been there.

“Tahith and Angel have been working hard behind the scenes. Hopefully, they keep on developing and get an opportunity and I’m sure they’ll take it.”

The Reds will be looking to finish the season as strongly as possible, with a space in the league’s top-four still up for grabs as well as the FA Cup and Europa League.

I wouldn’t expect to see any new debutants from now until the end of the 2019/20 campaign but Solskjaer’s comments show just how seriously he is taking United’s long-standing youth policy with a pathway to a big future always on the horizon for United’s young boys.

Read more: Solskjaer thrilled with what Harry Maguire has given Manchester United