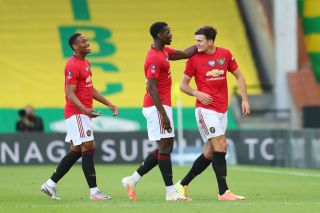 Ole Gunnar Solskjaer decided not to start Paul Pogba against Norwich City. While some fans were critical of the manager making too many changes for Saturday’s FA Cup win, it was perhaps more understandable why the Frenchman didn’t feature in the starting line-up.

Pogba has missed most of the season due to an ankle injury and he’s slowly being introduced to competitive football. However, the way in which he is playing makes it difficult not to start him in our upcoming Premier League fixtures.

Fortunately we at least brought him on from the bench and he helped change the game.

United were casual at best and allowed Norwich to hold us to a 1-1 draw, and it took a Harry Maguire winner at the end of extra-time to book a place in the FA Cup semi-finals.

Pogba had a role to play in the crucial goal we all craved. He played a lofting ball into the penalty area before Anthony Martial squared the ball to Maguire and he tackled it over the line from close range.

He played 50 minutes and created four chances on goal.

Here is a look at how United fans reacted to Pogba’s performance against Norwich.

Pogba coming off the bench to make all the difference, again.

Look at that pass from Paul Pogba breaking the lines and that’s why he’s one of the best midfielders in the world pic.twitter.com/AYwJGY2Ds1

Involved in the winner too. 🔥 pic.twitter.com/1vwEvlOGMy

See why it’s good to have more quality? The day Bruno isn’t on form, there’s Pogba to do the damage. The day Pogba isn’t, Bruno will do the damage. Both of them on form? Even better. Both off form? We have Igwe Martial.

Pogba. Every touch, drop of shoulder, stride, fient, pass, shot drips with majesty. What a player.

Paul Pogba. Game changer yet again. That is all.

We’re a completely different animal with Pogba on the pitch. He is by far our best player and once again he came on and made us infinitely better. #MUFC

Pogba balling like he didn’t just come back from a serious injury. Big baller