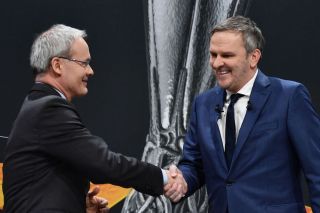 Ex-Liverpool idol Dietmar Hamann has spoken about Liverpool’s Premier League title win but admitted that his old side will not be able to repeat the dominance endured by Manchester United during their golden era.

Liverpool’s recent domestic title has seen them close the gap of titles to within just one (19-20) of Manchester United.

Along with their European success which, incase they’ve never told you, stands at six Champions League trophies. What am I saying? Of course they’ve told you about that.

Speaking in an exclusive interview with The Mirror, Hamann believes that his old side are now the top choice for players around the world to join, whereas, in his playing days it had been United.

Hamann said: “When I was a player, the club everyone wanted to join was Manchester United. You knew that signing for United guaranteed you winners’ medals.

“They were the biggest club, the club that everyone inside and outside England spoke about.”

Continuing to praise his old side’s recent success, Hamann of course struggled to shy away from mentioning United, he said: “Since Sir Alex Ferguson retired, United have suffered on the pitch,” he added. “And with perfect timing Jurgen Klopp has come in and made Liverpool the club everyone wants to join.

“In that respect, he has knocked United off their perch.” – If it’s taken one domestic trophy in 30-years to be considered ‘getting back on their perch’, that’s one patient Liver bird!

Addressing how Liverpool will want to replicate the dominance United endured throughout their golden era, Hamann admitted it is unlikely they will be able to, saying: “I am not sure Liverpool will dominate the Premier League like United did – because Manchester City and Pep Guardiola will have something to say about that.

“But Liverpool are five years ahead of United – and London’s big clubs are even further behind.

“Klopp has four years left on his contract – and by the time that is up he will want to get past United’s 20 titles and also win the Champions League again.”

The arch-rivals are in constant battle with one another for bragging rights over which one is to be considered the most successful English club side in history.

As reported by talkSport, Liverpool’s first ever Premier League title sees them move above United (42) into first with 43 major honours to their name.

However, with United still competing in two cup competitions this season, the standings could well reverse once more.

Read more: Phil Neville identifies one position United need to strengthen before they can challenge for title again