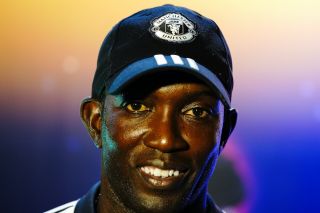 The German has made just one Premier League appearance this season after tearing his ACL in the Community Shield in August last year, but Pep Guardiola has already confirmed that Sane will leave the club this summer after turning down a contract offer, as per talkSPORT.

“The club offered two or three times and he rejected it.”

Sane was strongly linked with a move to Bundesliga giants Bayern Munich, but a deal never materialised and it was pushed further back by his unfortunate knee injury.

Bayern may still be interested in signing Sane this summer but United are another club in the market for more quality on the flanks, and Yorke thinks ex-teammate Ole Gunnar Solskjaer should try win the race for the winger’s signature.

“United has got a real good attacking bunch of young players,” the former United striker told Stadium Astro. “Add in Sancho, I like the boy Sane at City I really do [like].

“We haven’t got a left-footed sort of winger. The boy [Mason] Greenwood is coming to the fore recently but I like Sane.

“I really do think this kid is probably the quickest out of all them as well and he’s really got a good attitude.

“I know he’s got some injuries but if I was brave, if I was Man United manager at this point in time that’s the type of person I would go for.

“He’s had a couple of years in the Premier League, I’ve watched him very closely, he’s a player that I like a lot.

“The boy Sancho is obviously up there as well but if you can’t get him why not be brave and go for a player who’s played across next door and cause some stir, just stir it up a little bit. That’s what I would do.”

Just is clearly an opinion rather insight into what United or Solskjaer are thinking, but it would be interested to see what United fans think about it, so please cast your vote in the poll below:

Should United make a move for Leroy Sane this summer?