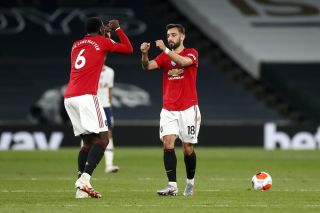 Manchester United star-man Bruno Fernandes has put a spanner in the works for the European press who relentlessly paint French midfielder Paul Pogba in a bad light.

Pogba, 27, is never out of the headlines for very long, it’s also rare that he’ll have a positive story written about him. The French World Cup-winner is constantly linked with a move away from United and widely considered to lack the level of professionalism required to be a star in England’s top-flight.

However, Portuguese new-boy Bruno Fernandes has put a spanner in the works for those driving the anti-Pogba agenda.

Speaking in a live video with SoccerBible, Fernandes revealed a humble gesture made to him by his French team-mate: “Paul [Pogba] is the guy who came when I arrived with a big book and said ‘where do you want to live, what price you want to pay, house or apartment’.”

“He flicked through the pages. I chose three places and he said okay tomorrow we will check them.

“I couldn’t imagine it would be fast like this because I lived in other countries and every time it was a problem to find a house and everything.”

Watch the video below as Fernandes tells his story about Pogba helping him settle in Manchester:

Video: Bruno Fernandes explaining how Paul Pogba helped him settle in Manchester when he arrived 💯