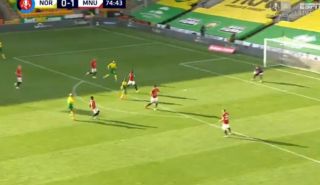 Todd Cantwell has equalised for Norwich City against Manchester United in the FA Cup quarter-finals.

Back to the drawing board at Carrow Road, with Paul Pogba and Nemanja Matic immediately asked to get ready to come on after Cantwell’s goal.

It was the first goal United conceded in this FA Cup campaign, and we hope it was the last…

Manager Ole Gunnar Solskjaer won’t want this game going to extra time with the amount of fixtures United have to play in such a short period of time to conclude the remainder of the season.

The first time I saw the goal I thought Sergio Romero could have done better, but after watching several replays you can see how the ball swerves away from him at the last second.

Still, someone could have closed Cantwell down or even applied pressure as he took his shot at goal.

Hopefully the Reds find a winner.