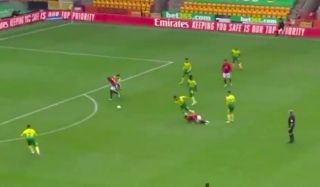 Norwich City defender Tim Klose has been sent off in the closing minutes of the FA Cup quarter-final agains Manchester United at Carrow Road.

United looked like they were about to snatch victory at the death, after a sensational Bruno Fernandes flick sent Odion Ighalo through on goal.

But Ighalo was denied the chance to score his second of the game and ultimately the winner as he was held back by Klose.

It was an easy decision for referee Jon Moss to make and the red card was shown very quickly.

It’s now advantage United in extra-time with their opponents down to ten men for the final half-hour.

See the footage below of the sending off below, courtesy of BBC Sport: