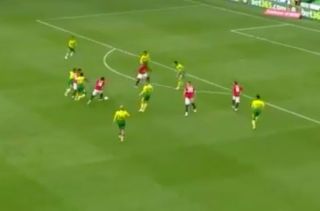 Manchester United have made a slow start to their FA Cup quarter-final clash against Norwich City at Carrow Road.

Ole Gunnar Solskjaer has made eight changes to his side that cruised past Sheffield United on Wednesday, but there is more than enough quality to defeat the bottom-placed Premier League side.

Unsurprisingly, Bruno Fernandes has looked United’s most dangerous threat so far, picking up good positions between Norwich’s midfield and defence.

But the most impressive piece of individual skill so far has come from Jessie Lingard, who has been granted a start in the inside left channel in a new look attack.

Lingard did well to make his way past two Norwich defenders with close control, and was perhaps unlucky not to get his shot away in a congested area.

United’s sluggishness in the opening stages can perhaps be attributed to the amount of changes made by the manager. Solskjaer may need to call on the big-guns such as Paul Pogba and Anthony Martial to get the Reds over the line in the second-half.

See Lingard’s piece of skill below, courtesy of ESPN: