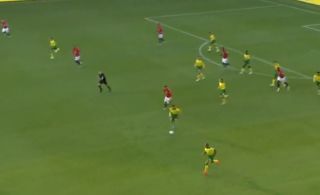 Manchester United and Norwich are currently playing deep into extra-time in their FA Cup quarter-final tie. Having played over 105-minutes of intense football, starting midfielder Bruno Fernandes has refused to give up, even this deep into the game.

Fernandes has continued to attempt to unlock the Norwich defence, his latest effort didn’t quite work-out which saw the Portuguese creative attacker lose the ball.

Whereas most players may have been left dejected, Fernandes took it upon himself to track the Norwich side who were about to break down.

You can see the grit and determination on the 25-year old’s face. You love to see it.

It’s still 1-1 in the second half of extra-time and it looks like the game will be going to penalties.
Read more: Ex-Manchester United player slams Luke Shaw performance against Norwich City