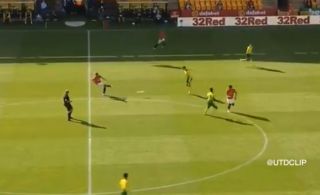 We already know Bruno Fernandes is a magician with the ball at his feet but I just can’t get enough of his silky through passes.

In the opening stages of Manchester United’s FA Cup tie against Norwich City at Carrow Road, the Portugal international played a ball forward to Odion Ighalo. Luckily for the Canaries, they were able to push Ighalo out wide away from the goal and nothing came of it.

But you’ve got to admire the way Fernandes plays the game. He does this regularly in games and it’s only a matter of time before Ighalo finds himself one-on-one with the goalkeeper.

United have been the slightly better side but Norwich are playing a very cautious game.

Watch the clip below, courtesy of BBC, as Fernandes attempts to play Ighalo in on goal. It was a perfect pass!

The players have just had their water break and are ready to resume play.