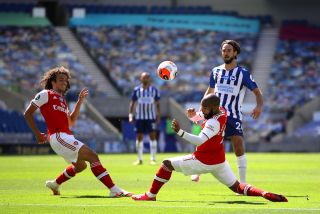 Perhaps the most bizarre transfer rumour to surface this week saw Arsenal midfielder Matteo Guendouzi, 21, linked to Manchester United, as per the Manchester Evening News.

The report states that, for about €40 million (£36.5 million), Guendouzi could be available, drawing interest from the likes of Atletico Madrid, Barcelona, Inter Milan, and PSG, if Get French Football News are to be believed.

There seems to be some credence in the reports, too, given that Guendouzi was omitted entirely from Arsenal’s squad in their recent 2-0 win over Southampton, despite being fit to start. Mikel Arteta mentioned ‘internal issues’ in the squad as the reason for his absence, which could be tied to the player’s recent outburst on the pitch during Arsenal’s 2-1 loss at Brighton (via The Guardian).

A relatively unknown figure when he joined the Gunners from FC Lorient for around £6.5 million in July 2018 (Transfermarkt), Guendouzi has become a regular in the Arsenal side, starting 42 matches in the last two Premier League seasons (WhoScored). Starting that many Premier League matches at 21, let alone for Arsenal, is a massive achievement, even if Mikel Arteta’s outfit are a shadow of previous sides in the London club’s history.

The player is one of the better midfielders in the Premier League and is actually probably worth more in the current market than Arsenal’s asking price of £36.5 million. The Gunners probably see this move as getting rid of a player who appears to be problematic in the dressing room, and at a huge profit to what they paid two years ago.

Nonetheless, I think it would be a huge mistake from Arsenal’s board to sell Guendouzi after this incident. I obviously cannot speak to the extent of his antics, but to play for the most frustrating side in England and want to fight the lack of ambition at the club is a feeling that United fans in particular could empathize with.

Guendouzi, more mobile than both his hairstyle and footballing style make him appear, may have a future at the top of the Premier League as a deep-lying playmaker. His ability to resist pressing and make intelligent decisions to progress play is a difficult skill to find in players, particularly in the England’s top-flight, and draws comparisons to Nemanja Matic, one of the best press resistors in the division.

Experienced defensive midfielders from other leagues have often struggled to adapt to the on-the-ball pressure placed on holding midfielders in the Premier League, with United midfielder Fred being the perfect example.

Guendouzi, however, joined from France’s second tier and adapted seamlessly, averaging a pass completion of 87.7% in his first season and improving to 88.4% in his second over an average of around 48 passes per 90 minutes in both seasons.

Ideally, the player will become a much better passer than Matic has been for United, with more quickness getting the ball out of feet and into the likes of Paul Pogba and Bruno Fernandes. 31-year-old Matic takes his time to select the right pass, but his body does not move as quickly as his brain, often giving opposition defences time to adjust when the ball arrives back at his feet.

Guendouzi is always aware of his surroundings, and can be a frustrating player to mark for opposition midfielders, as evidenced by the fact that he is the ninth-most fouled player in the Premier League. Scott McTominay, in fifth, is the only United player who is fouled more (WhoScored).

Where Guendouzi differs greatly from Matic, however, is in defensive zones. Matic, a natural defensive midfielder, is a master of dictating his side in their third, such that the opposition cannot penetrate through the middle. Guendouzi, on the other hand, is a relatively inexperienced deep-lying playmaker, and tends to get caught out by elite attacking midfielders.

While players like McTominay and Fred use their incredible mobility to press the opposition and force a mistake, Matic, is patient, cutting off passing lanes and forcing attacking midfielders to attempt speculative passes or play out to the wings. Former United manager Jose Mourinho loved this trait, which, when combined with centre-backs who can clear crosses, nullifies most sides in the Premier League.

Guendouzi does not have Matic’s aerial presence, but more importantly, he does not have the patience in midfield, nor the energy of Fred and McTominay to aggressively win the ball back. In other words, while he is the type of player you want on the ball in your own third against Europe’s elite, he unfortunately is not the type of player you want to mark the Premier League’s top attacking midfielders.

The player is reasonably capable as an individual defender, averaging 1.3 tackles and 1.2 interceptions per 90 minutes in the Premier League, while committing only 0.5 fouls. This suggests that, if he can get to the ball more consistently, Guendouzi can be an effective defensive midfielder, but he needs coaching and a few years more of experience to reach that level.

Under the tutelage of Matic and Michael Carrick, who was one of the best deep-lying playmakers in England during his playing career, Guendouzi has the attributes to grow substantially, even if he does not hit the levels that Carrick did at United. He also fits the profile of United’s recent signings, as Ole Gunnar Solskjaer has aimed to build a younger, fitter team that is expected to rise to the top as a group in upcoming seasons.

However, while Guendouzi has great potential and would be the best passer of the ball from United’s current defensive midfield options, he falls short of every senior midfielder currently at the club in terms of overall quality. Even at Arsenal, the likes of Granit Xhaka and Lucas Torreira are currently at a higher level than the Frenchman.

If Guendouzi aspires to be one of the best midfielders in Europe, he needs to join a club where he will play at least the same number of matches as he does at Arsenal, or secure a loan to such a club. Equally, if Solskjaer aspires for United to break into Europe’s Top 10 clubs next season, whoever plays in his defensive midfield slot must be a consistent and elite midfielder and ball-winner today.

Guendouzi is not that type of player, and he is not yet an elite deep-lying playmaker either, making this move highly unlikely unless a current United midfielder departs the club this summer.