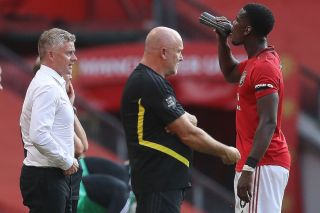 Manchester United manager Ole Gunnar Solskjaer has warned Paul Pogba that he doesn’t want to end his career with regrets.

For the same reason, Robin van Persie left Arsenal to join Manchester United because it was the only way he’d win a Premier League winners medal. The Gunners huffed and puffed for years but offered sheer mediocrity.

Pogba has been hit and miss for United since joining from Juventus but since Project Restart and his recovery from ankle injury, we’ve been impressed by his performances; one coming off the bench against Tottenham and more recently versus Sheffield United.

It has been infuriating for fans because of the regular reports that he wants out of the club and would prefer to be playing his football at Real Madrid or back in Juventus.

Those two deals have never looked so unlikely and it’s down to coronavirus, as well as the fact Pogba has played very little football this term.

Speaking about Pogba prior to United’s FA Cup quarter-final against Norwich City, Solskjaer told the press (via Metro): “Paul knows he’s a special talent and he doesn’t want to in five or ten years time look back and think I didn’t make the most of it.

“He is already a World Cup winner, he has won things with Juventus and us so I’m not surprised by his enthusiasm and dedication to us.

“The two [Pogba and Bruno Fernandes] can play well together and that is exciting. There will be rotations and times when Paul will play up with Bruno sometimes deeper, sometimes he will play in a diamond.