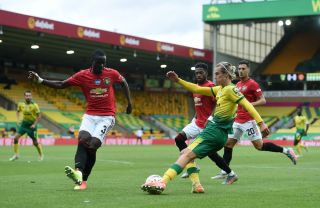 Manchester United and Norwich have played 45-minutes in their FA Cup quarter-final tie with the score level at 0-0. Fans have taken to social media to express their disappointment in the Red’s first-half display.

However, fans have been left feeling disappointed by United’s opening 45-minutes in what has been a lackluster performance which has lacked the cutting-edge.

The Reds have often found themselves faltering at the final stage of their attacks, offering very little in terms of killer quality.

Without a doubt, United’s best player so far has been Portuguese midfielder Bruno Fernandes. The star-man and fan favourite has been a constant architect in pursuit of unlocking The Canaries’ defensive line, including a stunning pass to striker Odion Ighalo.

Norwich arguably came closest to breaking the deadlock in the final moments of the first-half in what was 30-seconds of panic in United’s box. Had it not have been for a lack-ditch block by captain Harry Maguire, European hopefuls United could well have found themselves 1-0 down to Championship threatened Norwich.

Solskjaer will be keen to get his men together in the dressing room in an attempt to regroup his side ahead of the second-half.

With a bit more belief @NorwichCityFC could be a goal up in this game. Grew into the game as the half went on.

Let’s see what the 2nd half brings…#NORMUN #FACup

That was a shocking half of football😪 #NORMUN

Lingard, is really losing it. He’s overdoing stuff to impress.

Fred and Bruno are having a good game.

This attack is moving at traffic pace😤 #NORMUN

Can we do 9 changes? Utterly lethargic!#NORMUN

That was a difficult 45mins to watch. #NORMUN

If you’re going to put that team out just forfeit the fucking tie. Why start Lingard and Mata, you know exactly what you’re going to get. Slow and ponderous on the ball, non existent off it. Back to LVG football.#NORMUN

Still goalless at the break.
I am not yet impressed by our center forwards Odion Ighalo and Jesse Lingard.
Come on Reds we need to kill off this game as early as possible. 👏 #NORMUN #MUFC