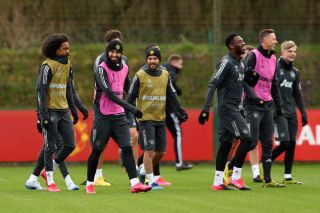 Timothy Fosu-Mensah has been named in a Manchester United matchday squad for the first time since May 2017.

Ole Gunnar Solskjaer has made eight changes to his starting XI to face Norwich City this evening, with Fosu-Mensah rewarded with a place on the bench.

The versatile Dutch defender is likely to provide centre-back cover this evening, as United look to progress through to the FA Cup semi-finals with victory over the Premier League’s bottom-placed team at Carrow Road.

Many United fans had expected to see young defender Teden Mengi make the bench this evening. The Mancunian born defender has had a hugely impressive season for the Under-18 and Under-23 sides, and is destined to progress to the first-team in the near future.

But Solskjaer has opted for the more experienced Fosu-Mensah, who can provide right-back cover for Diogo Dalot or could replace Harry Maguire or Eric Bailly in central defence.

Fosu-Mensah, 22, was fast-tracked into the first-team at a similar time to Marcus Rashford under Louis Van Gaal in the 2015/16 season, but has struggled to impress during loan spells at Crystal Palace and Fulham.

He has spent this season recovering from an anterior cruciate ligament injury that he sustained towards the end of his time at Craven Cottage and will hope he can now make up for the lost time and establish himself as a regular squad member under Solskjaer.

Some fans are happy to see the youngster return to the squad and would like to see make an appearance from the bench this evening.

🥁 Here's how we line up at Carrow Road for our #FACup quarter-final clash! 🚨

Let's do this, Reds 👊#MUFC @DHLManUtd

Good to see Fosu-Mensah on the bench. It's been ages #NORMUN #FACup

He hasn't featured for #mufc since May 2017. pic.twitter.com/ySdmdkFrH6

Great to see rotation. Love to see Bailly starting and Fosu-Mensah on the bench. Really important game for Dalot! https://t.co/NHzfK43VCC

Timothy Fosu-Mensah in a United matchday squad for the first time since May 2017. Hope we get to see some minutes of Fosu-Mensah. #NORMUN