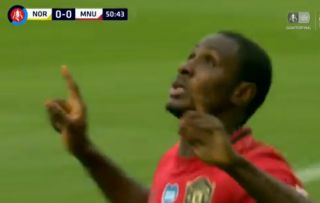 Odion Ighalo has continued his incredible record of scoring in every game he has started in for Manchester United.

The goal puts his side 1-0 up with a place in the FA Cup semi-finals up for grabs.

The Nigerian scored his fifth goal for the club in 11 appearances and his goal was typical of a clinical centre-forward, in the right place at the right time and ready to pounce.

A trophy in Ole Gunnar Solskjaer’s first full season as manager would be a remarkable achievement. This further proves that extending Ighalo’s loan deal was worthwhile to the cause.

Watch the goal below, video footage courtesy of ESPN:

Pure bliss the way in which he throws his leg at the ball.