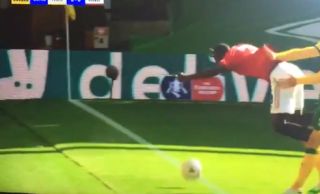 Manchester United were less than five-minutes into their FA Cup quarter-final tie against Norwich when centre-back Eric Bailly did something only he is capable of and it has loads of fans in stitches across social media.

The elaborate defender found himself shielding the ball deep in his own half on the right hand side of the pitch, as the ball was rolling out of play, Norwich player Emi Buendia contested Bailly for it.

Check out the clip below, footage courtesy of BBC.

Loads have fans have since taken to social media to show how hilarious they’ve already found Bailly’s on-field antics.

I swear Bailly’s on drugs half the time

I Love Bailly but he gives off Eboue vibes 🤣

Read more: One key area Manchester United can look to exploit Norwich and it&#8217;s gone under the radar