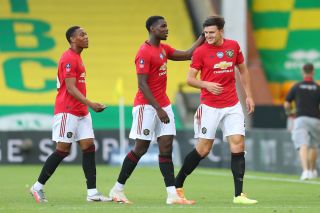 Manchester United have narrowly avoided going to penalties against bottom of the league table and relegation threatened Norwich City in their FA Cup Quarter Final tie this afternoon.

The Reds played a poor game overall offering very little spark and being unable to replicate their performance in midweek against Sheffielf United.

United striker Odion Ighalo opened the scoring with a goal just before the 60-minute mark, however, the Reds were soon pegged back by an equaliser by Norwich bright-spark Todd Cantwell.

Ole Gunnar Solskjaer’s side did manage to see the game out, albeit, much later than they would have hoped to. Captain Harry Maguire settled the tie with a dramatic late winner against 10-man Norwich City. The defender struck home what turned out to be the winner with just a few minutes left of extra-time.

Now, fans have taken to social media to express their discontent after a rather underwhelming performance by Solskjaer’s men. We asked our followers to sum up the Red’s performance using just three-words: