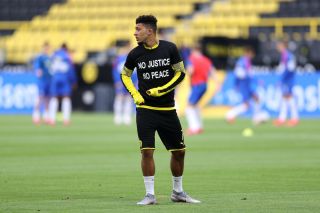 Rewind to the summer of 2016 and one name dominated every football headline and that was Paul Pogba. Every outlet and every fan became so excited to see United break the world record transfer fee to bring the Frenchman back home to spearhead the Jose Mourinho revolution at Old Trafford. Spoiler alert it didn’t, Mourinho spectacularly fell out with Pogba and he didn’t last too long after that.

Back in the present a new name is the buzz word on the lips of all pundits and United fans is Sancho, the Dortmund winger is daily or hourly linked to a move to Old Trafford. But is this the signing that will push United to the next level or the latest big name to flop at Manchester United?

There is no denying his talent but the last few weeks there have been question marks over his maturity and decision making off the pitch. Now this could just be mistakes made because of his youth that he will learn from and mature or is this another sign that means United should consider their options?

He was criticised recently by Dortmund Sporting Director Michael Zorc about his visit to a hairdresser during lockdown, stating via the Daily Mail: “Jadon is not only an exceptional footballer who is noticeable on the pitch but now and then outside the pitch.”

Sancho is not the first footballer at Borussia Dortmund to be categorised as having an attitude problem with Ousmane Dembele and Pierre-Emerick Aubameyang having their own incidents while at the German Club.

United have lacked a proper right winger since Nani left the club under Louis van Gaal in 2014, Sancho certainly ticks all the boxes for this position in his ability and profile and would add a new dimension to United’s attack giving them the balance the team has lacked for years.

Since Ferguson retired United have spent big on a few players and they have been underwhelming to say the least in Angel di Maria, Radamel Falcao, Henrikh Mkhitaryan and Pogba to name a few.

Ole Gunner Solskjaer has got all his transfers right so far with Harry Maguire, Aaron Wan-Bissaka, Daniel James, Odion Ighalo and Bruno Fernandes all having impressed since joining. So that is why this potential transfer is critical to United’s future but also for Solskjaer, if he comes and it works Ole could lead United back to glory but if he flops then he will be the stick used to beat him with and force his exit from the club.

He would be hounded by fans and pundits alike arguing a new manager will get the best out of him just like Mourinho was about Pogba, although there were several issues with Mourinho this was the tip of the iceberg.

Make no mistake the boy is talented, but Dortmund is a place where the system and the structure is designed to help players reach a certain level and then move on for big money. Numerous players have left Dortmund over the years and have failed upon leaving, United have bought two in Henrikh Mkhitaryan and Shinji Kagawa.

Whilst Mario Götze, Ousmane Dembele, Pierre-Emerick Aubameyang and Christian Pulisic have had mixed careers at best since leaving so United should make sure they have done their homework before splashing the cash once again.

The club need to have backup options in place in case they don’t land Sancho, Rabbi Matondo from Schalke has been linked plus Bournemouth’s David Brooks plus Valencia winger Ferran Torres and Bayer Leverkusen’s Leon Bailey. I think the club should look to pursue all avenues even if that means they don’t sign Jadon Sancho, get the right fit for the club whoever that may be.

Every fan will tell you he is the only player to sign but he has to be the right player and if he doesn’t fit in or hit the ground running then he will cast a shadow over the club. Ole will have to spend every press conference fielding questions about Sancho just like he has with Paul Pogba.

If he is the final piece of the jigsaw then by all means get him and I will support him all the way but just because he plays well in a good Dortmund team doesn’t mean it will translate over here. United still have not sorted Paul Pogba out long term and will this be another case or buying someone for the sake of buying someone or getting a player who will add to what you will do on and off the pitch.

Will Sancho be the spark that lights Ole Gunner Solskjaer’s title charge or will United get their hands burned again?

Read more: Opinion: Did you miss the irony in United&#8217;s win over Sheffield?