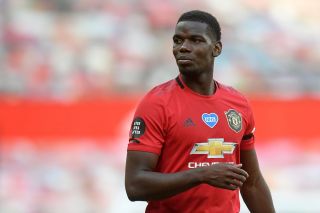 Following a comfortable 3-0 victory over Sheffield United, Manchester United supporters were left with several talking points. So many, in fact, the majority probably overlooked the game’s failure to deliver on its pre-match billing.

The distractions? First and foremost, Anthony Martial not only scored his first career top-flight hat-trick and United’s first since the Sir Alex Ferguson era, he could be seen smiling in virtually every camera shot throughout the match. Delight is an emotion not previously associated with the sullen Frenchman.

Second, can someone help Marcus Rashford find his footing? The school lunch hero missed an easy sitter and a more difficult chance, both directly in front of stand-in Blades keeper, Simon Moore. His inability to finish left him three behind partner Martial in the goal department although his two assists were executed with far greater composure.

Speaking of stand-in keepers, Sheffield asked just the one rather polite question of David de Gea in this match. After his gaffe against Spurs cost United a crucial three points that would see the Red Devils level with Chelsea and in fourth place on goal difference heading into the Blues’ tilt with Manchester City at Stamford Bridge today, you’d think they’d be more eager to test the shaky Spaniard. But Dave didn’t need to make a save until the game’s final ten minutes. He’ll look forward to further spectatorial outings during the run-in as pressure ramps up for the club to install on-loan academy star Dean Henderson in the Old Trafford goal.

With all the surprises and the contest turning out to be a walk in the park for the home side, it was easy to forget the pre-match excitement provided by news that Bruno Fernandes and Paul Pogba would start their first United match together. Visions of spectacular movements, insightful through balls and inch-perfect 50-yard diagonal volleys danced in our heads. Surely, Rashford, Martial and Mason Greenwood, named as the three starting forwards, would benefit from the presence of not one but two world-class playmakers? Instead, Martial and Rashford created most of the excitement on their own.

It wasn’t that Bruno and Pogba gave poor performances so much as being limited to cameos.

The Portuguese attempted several of his impromptu slide-rule passes but Chris Wilder’s patchwork defence [missing Henderson, John Egan and Jack O’Connell] proved sufficiently organised to anticipate and intercept his efforts. Bruno took two shots with neither finding the target and completed only 77% of his passes along with one dribble (via WhoScored). His overall delivery on six corners was not vintage either. Still, if that’s a bad game, United fans should accept it happily.

Meanwhile, the Frenchman might as well have enjoyed a cuppa with De Gea for the majority of his 80 minutes on the pitch. His evening was that peaceful. On the ball, Monsieur Labile usually found time and space. When he didn’t, it was no trouble shaking off a clutching defender or dancing around a marker. He wasn’t hunted in packs like the pre-Bruno days.

During the run of play, Pogba never looked so concerned as he did while reciting his pre-match prayer. He barely raised a sweat in the sweltering 31° twilight. It’s fair to say his late run through half the Sheffield United side and into the box was inspired by sheer boredom. In total, he completed six dribbles and 88% of his passes.

To be fair, the ease with which the midfield duo coped with their attentive Blades counterparts indirectly contributed to Martial and Rashford’s success. As did the third wheel in Ole Gunnar Solskjaer’s midfield. Nemanja Matic put in a shift, starting in place of Scott McTominay. The Serb completed 96% of his passes and left two defenders in his wake with the ball at his feet despite being the defensive specialist in the centre of the park.

While Pogba and Bruno didn’t dominate proceedings, their partnership delivered a promise in which Reds can revel and opponents stew. Ole Gunnar Solskjaer can finally deploy a balanced, composed attack. In defending against it, opponents must pick their poison. Do they focus on stopping the midfield, containing the wide play or pressing high and leaving acreage behind? Whatever their preferences, rare is the Premier League club who won’t find themselves on their heels against Manchester United.