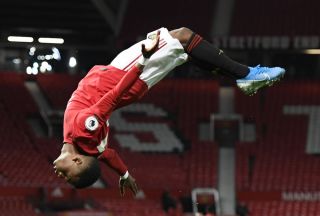 Largie Ramazani is one of nine Manchester United players that will be released when their contracts expire on June 30.

Ramazani, 19, is a winger with plenty of potential and some fans expected him to be given the opportunity to shine under Ole Gunnar Solskjaer after thriving in the U23-side this season.

The Belgian youngster scored nine goals and assisted two more in the Premier League 2 before the season was curtailed early due to the coronavirus pandemic.

He was handed his first-team debut from the bench in the Europa League game against Astana in November, with Solskjaer well and truly blooding the youth in Kazakhstan.

But his time at Old Trafford is now over, after he could not agree on a new contract with the club.

Manchester Evening News report that United decided against meeting Ramazani’s excessive wage demands, given he was not guaranteed a long-term future at the club.

Instead, Ramazani is now expected to continue his development by joining a Spanish second-division side.

See what some fans made of his exit on social media:

Surprised ramazani is being released, he'd have benefitted from a loan. Hope they all find clubs n maybe a club like Bolton could pick some up n give them a opportunity, it be a win win for both. #Bwfc would get some good hungry players who can play good football #mufc pic.twitter.com/JBEXwOH6o4

Wherever Largie Ramazani ends up eventually, I hope he does well. Set high standards for himself this season in the reserves & maintained it through.

Not only the U23’s best player alongside Jimmy Garner but also the most improved. #MUFC pic.twitter.com/P6hLNsY5lz

Why Ramzani he is good wtf?

Nah wtf are we going to release ramazani 😭

Largie Ramazani has been let go by Manchester United.

Thought he’d get a few chances under the first team. Guess he wasn’t good enough for Ole to do so.