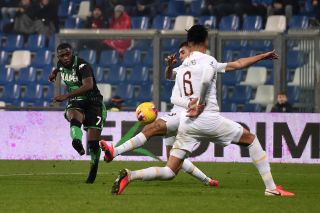 Manchester United are enduring a rich-vein of form having recently extended their unbeaten run to 13 games after their stunning display against Sheffield United on Wednesday. However, despite their impressive form the club is still believed to be looking to add to their attacking options, specifically on the right-wing.

United have been linked with Borussia Dortmund’s Jadon Sancho for the best part of 12-months, however, with the German side reportedly looking to settle for nothing less than €130m for their star-man, according to Bild, the Reds could be forced into seeking alternatives.

One player who is catching the eye of manager Ole Gunner Solskjaer is Sassuolo wide-man Jeremie Boga.

Boga, 23, has impressed during this season’s Serie A campaign having scored eight goals and assisted a further four in 27 domestic
appearances. One of the young attacker’s best moments came against Torino where he scored one of the goals of a season.

One of the best you’ll see this weekend 🚀🚀🚀#SerieA pic.twitter.com/vq4axzGtTx

Stretty News have recently obtained information from a source extremely close to Boga who has confirmed that United are indeed tracking the 23-year old attacker.

It is understood that United are one of a list of clubs considering Boga, including Bayer Leverkusen, Wolfsburg, Napoli, Everton and Borussia Dortmund should Sancho depart.

Our source has confirmed that they’re convinced the Reds will go for Sancho, but has acknowledged that they are seriously considering Boga as a more realistic alternative should any proposed move for Sancho fall-through.

It has also been revealed to us that Sassuolo’s valuation of Boga stands at around £25-30m, aligning with our sources’ thoughts that United are weighing up a cheaper alternative to Dortmund’s €130m asking fee for Sancho.

As it currently stands though, United have yet to make an official approach for Boga but that could be set to change in the coming weeks once a better understanding of the market is established.