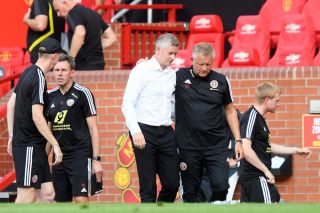 Chris Wilder has claimed Manchester United are the best team Sheffield United have come up against all season.

Last night’s game saw Anthony Martial net a hat-trick (first Manchester United player in seven years to do it in the Premier League) at Old Trafford to give the Red Devils a 3-0 win over Sheffield United.

Although pundits had them in their Champions League discussions during the pandemic, I feel the Blades as a newly promoted side have already exceeded expectations this season.

They were convincingly beaten by a much better side on Wednesday night and Wilder told talkSPORT: “It was one of the toughest, if not the toughest, nights of the season.

“You have got to come here on a night like this, especially when you are not in the greatest of form, to give yourself a platform to build and get a foothold in the game.

“Obviously that didn’t happen after two or three minutes going a goal down. Turning the ball over as cheaply as we did to world class players we are inviting pressure on and you are going to invite opportunities and they’ve got some unbelievable players.

“If you do that it’s going to be a difficult evening for you. I thought we had a decent little period midway through the first half but that’s all, a little period.

“I talked to Al [Alan Knill] that if we can get through to half-time and get the players in 1-0 down, possibly the game should have been taken away from us, but to be 1-0 down at Old Trafford is not the worst scoreline in the world with 45 minutes to go but then obviously we committed another mistake.

“Their third goal was a great goal. Great build-up and movement. Their movement all night was fabulous and we couldn’t get near them. That’s the disappointing thing because we were passive in our approach. We stood off of them and we allowed good players to dictate the game and it became very, very easy for them.”

I like Wilder and it’s not just because he was gracious in defeat. It’s more to do with his outlook on the game and how he takes such a beating against a better side when his team has been in bad form.

They have some big fixtures coming up against Arsenal, Tottenham, Wolves, Chelsea and Leicester City. A lot will be asked of Dean Henderson in those games.