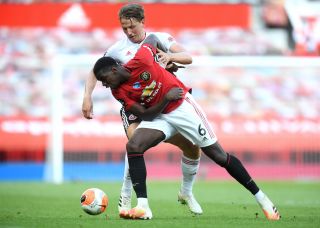 The France international started his first game for United since September having endured an injury-ridden season so far.

While Anthony Martial netted a hat-trick against the Blades, manager Ole Gunnar Solskjaer was delighted with Pogba’s disciplined display in midfield.

“He’s quality out there. He settled us,” Solskjaer said about Pogba after the game (via Metro).

“Good decision making, good passing. Hard to take the ball off him. I’m very pleased we can get more minutes into him and let’s see what we do in the weeks coming.”

Pogba was playing alongside Bruno Fernandes for the second time and after last night’s convincing win, United are just two points behind Chelsea in fourth-place. The Blues take on Man City tonight and we’ll be hoping our rivals can do us a favour.

Watch his highlights in just over 10 minutes below, footage courtesy of Sky Sports:

Nemanja Matic was another one of the standout performers against Sheffield United. He also sung Pogba’s praises after the match.

“I think it’s always good [sic] play with top players. Not only them, we’re lucky we have top players in every position,” Matic told MUTV.

“So tonight I played with Bruno and Paul. I think we did well, it was good there, I’m sure in the future we can improve a lot together, and also with Scott [McTominay] and Fred, whoever plays with us.

“I’m happy with the team performance and the way we controlled the game.

“I think we had control during all 90 minutes, of course we knew they were going to age some dangerous counter attacks because tactically they play well.

“We analysed them very well, we treated them with respect, I’m so happy with the team performance 3-0 against a team who creates problems for every team in the Premier League.”

Read more: Opinion: Nemanja Matic display proves that he is one of United’s most important players