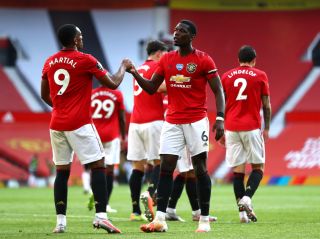 Ole Gunnar Solskjaer’s side took four points from a possible six, and you can hear it in our voices that we are feeling optimistic about clinching a Champions League spot.

We look back to the 1-1 draw away to Spurs as well as the convincing home win over the Blades as both games were held behind closed doors.

A lot of eyes will be on Chelsea’s league encounter with Manchester City on Thursday night. Should the Blues lose, they will sit just two points ahead of the Red Devils in fourth-place. We are awaiting news from the CAS case on whether City will be allowed to play in the Champions League next season — potentially making fifth-place a Champions League spot.

But United have what it takes to finish fourth or maybe even third if Leicester City start dropping more points.

The biggest talking points on this week’s podcast were David de Gea as United’s future No.1, Anthony Martial leading the line for the foreseeable future, and whether or not to expect many changes on Saturday when Solskjaer names his line-up to face Norwich City in the FA Cup.

You can listen to the podcast below, or alternatively via your preferred podcasting apps such as Apple Podcasts and Spotify.

If you like the podcast and want to support what we are doing at Stretty News, please become a member on Patreon.

The next podcast will be recorded on Monday morning to review United’s weekend clash against Norwich City in the FA Cup.