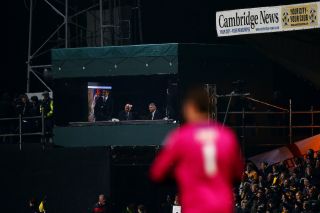 Gary Lineker liked what he seen last night as Manchester United dominated Sheffield United in a 3-0 win at Old Trafford.

As a neutral, Lineker was quick to praise Marcus Rashford’s performance after the England international started along with Anthony Martial and Mason Greenwood.

Rashford assisted the opening goal when his powerful cross found Martial inside the box. It was the first of three goals for the Frenchman last night, and the first of two assists for Rashy!

However, Aaron Wan-Bissaka teed up Martial for his second goal to put United 2-0 up at half-time.

Although he created two goals against the Blades, Rashford missed two glorious opportunities to score as he was rusty in front of goal. He will improve over the coming weeks as he gets more minutes and that should put us in a position to finish the season strongly.

Rashford was in the best form of his career prior to his double-stress fracture injury and with Martial on fire last night, so it all seems to be coming together nicely with Bruno Fernandes, Paul Pogba and Nemanja Matic pulling the strings.

The Match of The Day host dropped a reference to Rashford’s work to help vulnerable children during the pandemic. His efforts saw the Government pull a U-turn to ensure children would receive meal vouchers during the summer months.

2 assists for @MarcusRashford. It’s not just school meals he puts on a plate.

Rashford has yet to score a goal since the Premier League’s resumption but he is currently level on 14 league goals with Martial in the goal-scoring charts. It makes for an intriguing race for the remaining games.

United are in action again on Saturday against Norwich City in the FA Cup, behind closed doors at Carrow Road.

Read more: Opinion: Nemanja Matic display proves that he is one of United&#8217;s most important players